What Are the Stages of Periodontal Disease? 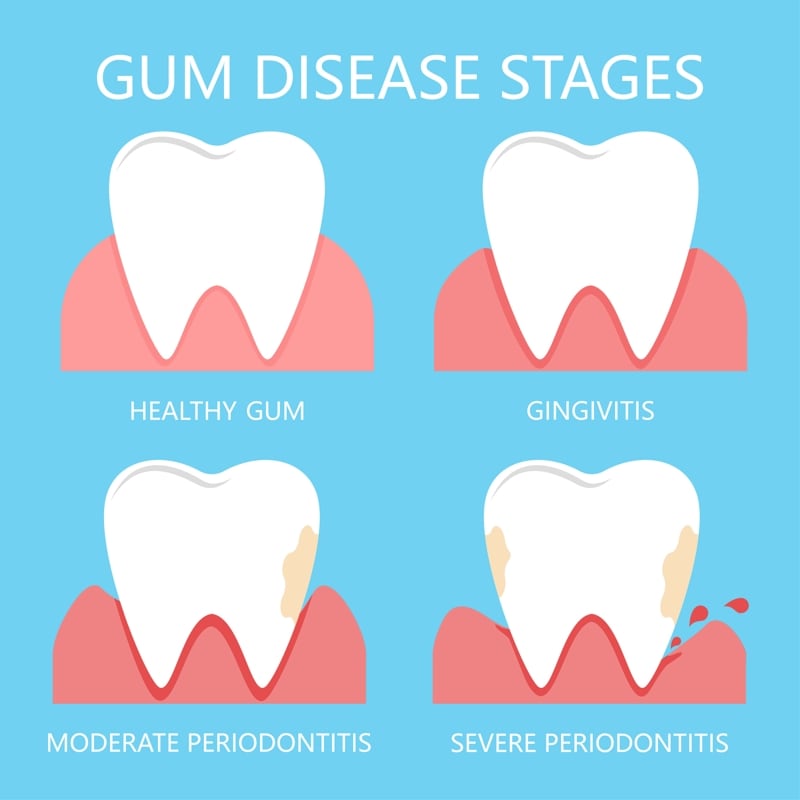 Maintaining good oral health is as simple as daily brushing and flossing and twice-yearly checkups at the dentist, but many people are under the misconception that the worst consequence for letting oral health slide is a cavity or two. While a cavity is indeed serious enough to require dental intervention, it is only one of many possible negative outcomes. One of the worst is periodontal disease, which if left untreated can result in tooth loss and additional health issues.

What is periodontal disease?

Inadequate brushing and flossing allows bacteria to thrive where the teeth meet the gums, and the subsequent build-up of plaque and tartar can result in a serious gum infection. Periodontal disease, also called gum disease, can also be caused by smoking. Certain medical conditions such as diabetes or medications that reduce saliva flow are also significant risk factors. Periodontal disease occurs in four separate stages, and only the first stage is reversible—the rest will require advanced dental treatments.

Gingivitis results from a build-up of plaque around the teeth, causing swelling and redness in the gums, bleeding when brushing or flossing, and occasional bad breath. At this point, the infection is mild and has not attacked the tooth root or bones, which means it is reversible. All you need to do is step up your brushing and flossing routine, and also get a deep professional cleaning from your dentist.

Once periodontal disease progresses past gingivitis, it might not be reversible but it is still manageable. At this stage, the infection has spread to the bone and begins to attack bone tissues with stronger, highly aggressive bacteria. Symptoms of slight periodontal disease include increased swelling or redness of the gums and bleeding during brushing or flossing. Your dentist can diagnose this stage of the disease by probing the depths between your gums and teeth. If the depth is between four and five millimeters, you likely have slight periodontal disease that will need specialized cleaning procedures to treat.

The symptoms of moderate periodontal disease are the same as slight periodontal disease, although probing depths will be deeper, between six and seven millimeters. With those deeper pockets between your teeth and gums, even more bacteria attacks your teeth and jawbone. At this stage, the bacteria can make its way into your bloodstream and immune system as well. The treatment for stages 2 and 3 is also the same: scaling and root planing, which are intense deep cleaning procedures that remove bacterial deposits far below the gumline.

If you ignore the symptoms of earlier stages of periodontal disease, you will shift into stage 4, which threatens a 50-90% chance of irreversible bone loss. Symptoms of this final stage include red, swollen gums that ooze pus, painful chewing, extreme cold sensitivity, severe bad breath, and loosened teeth. The only remedy at this point is periodontal surgery or periodontal laser therapy, which will clean out the deep pockets of bacteria beneath the gums and allow the infected tissue to heal.

Daily brushing and flossing is the most effective way  to prevent periodontal disease and the related symptoms and health complications. But if you do have symptoms of earlier or later stages of gum disease, it’s important to see a dentist as soon as possible.

At San Diego Periodontics & Implant Dentistry, we specialize in gum health and treatments, so if you have questions about periodontal disease, check out our FAQ page or call us at (619) 543-0905 to schedule a consultation.

PrevDoes Diet Affect Gum Disease? Make Sure You Eat These Foods
How Missing Teeth Will Affect Your Face and JawboneNext

We accept all PPO insurance plans