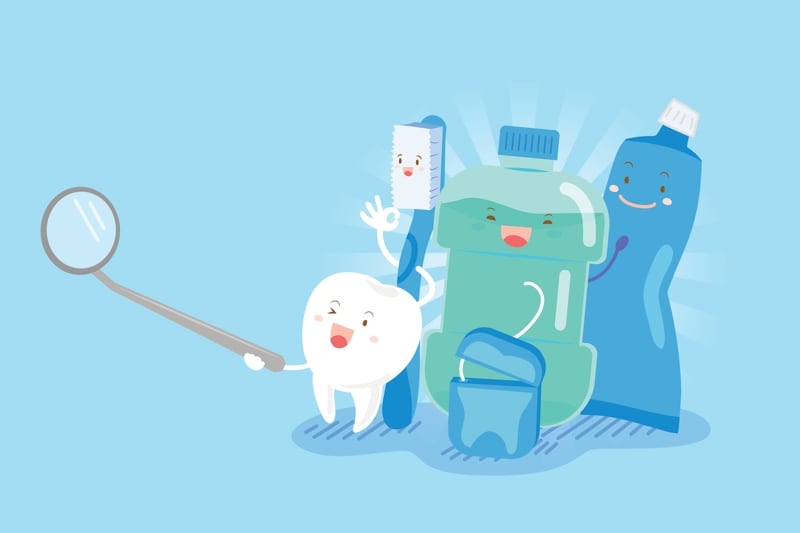 As your dentist reminds you during your checkup every six months, the best way to maintain good oral health is twice-daily brushing, flossing, and rinsing with mouthwash. However, you might be wondering if there are advantages or disadvantages to the order in which you tackle these tasks. In general, you should be in good shape if you do them all consistently, but there are benefits to doing them in a particular order. Here’s a brief look at the most widely recommended order:

Although many people brush first out of habit, there are benefits to flossing first. Using the analogy of sweeping a floor before you mop it, flossing gets rid of large particles of food stuck between your teeth, which allows the toothbrush bristles and fluoride in your toothpaste to reach tiny gaps and crevices that would be otherwise blocked. Additionally, if you brush first, you’re more likely to spend time on brushing but rush through flossing. Flossing first ensures you’ll give the task the time and attention it deserves.

While brushing might clear out particles first that you won’t have to floss out later, brushing second ensures your toothbrush and toothpaste are working in the most efficient manner possible. Another advantage of brushing second is that it will give you time to give your toothbrush a quick peroxide soak before you use it. Bacteria thrive on toothbrush bristles, and dipping them into hydrogen peroxide for at least five seconds will kill bacteria and prevent your toothbrush from redistributing the bacteria into your mouth.

Mouthwash is a great finishing touch to your daily oral health routine. Packed with fluoride and minty freshness, mouthwash helps strengthen your teeth, prevents cavities, and eliminates bad breath. Most mouthwashes on the market work best if left on the teeth for a while after a 30-60 second rinse, which makes rinsing with mouthwash a natural final step to your routine. Just be sure to avoid drinking water for at least a half hour after rinsing with mouthwash to ensure maximum effectiveness.

Choosing your own combination

Habits can be hard to break, so if you’re a lifelong “brush first” kind of person, don’t worry—you aren’t doing anything wrong. Flossing first can provide better results, but overall, if you’re brushing and flossing daily, you’re doing a great job with your oral health, regardless of which order you choose. However, it’s still important to use mouthwash last, as the product won’t work as well if rinsed away during subsequent oral hygiene steps.

A standard toothbrush and regular floss do a great job keeping your teeth clean and healthy, but there are other products on the market that some people prefer.

A proxy brush, also called an interdental brush, has a plastic handle and a small head of bristles held together by a wire that is designed to fit between the teeth. These are especially useful for people who have larger spaces between their teeth. Proxy brushes are available in different sizes, and can be used as an alternative to string floss.

A water flosser (commonly known by the brand name Waterpik) is an oral irrigator that sprays water under pressure  between your teeth to remove food. Think of it as a power wash. Water flossers should not replace flossing but should be used in addition to flossing for a more thorough cleaning at home. However in the case of people with mobility issues, water flossers may be a better option for people who might have difficulty using regular floss.

People with a history of gum disease (also known as periodontal disease) might require dental cleanings that are deeper and more frequent than regular dental cleanings to keep their mouth in top-notch health. Periodontal maintenance can help prevent the progression of gum disease, while also preventing future dental problems, such as tooth decay and bone loss. San Diego Periodontics & Implant Dentistry specializes in periodontal maintenance and treatment, so if you need a deeper cleaning than your twice-a-year cleanings provide, give us a call at (619) 543-0905.

We accept all PPO insurance plans